What a productive weekend!

I know it was Mother's Day weekend, which apparently means I was supposed to relax and put my feet up and let other people do the work. But, my to-do list was too long, and it was full of things I really and truly wanted to do! I started bright and early Saturday morning and didn't stop until about 10:15 on Sunday night. Today, I'm sore and exhausted. But I'm okay with that because it means I had a very productive weekend.

First, we finally completed assembly and placement of the new entertainment centers. First, the front room, where my son Aaron spends most of his time. Here's the "Before." 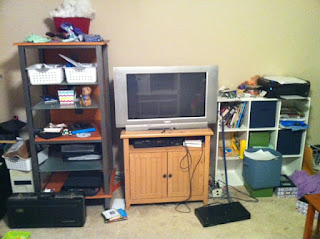 It's downright embarrassing. Toys, school supplies, video games, a saxophone....all strewn about, completely disorganized. This was a huge project. We moved everything out, vacuumed, shampooed the carpet, then moved the new furniture in. We also replaced the 32" tube HD tv with a 32" flat panel TV that was being underutilized in the spare bedroom. Here's the after: 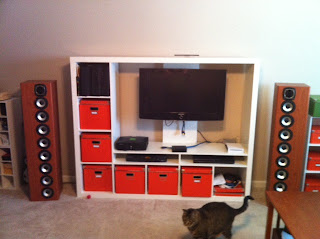 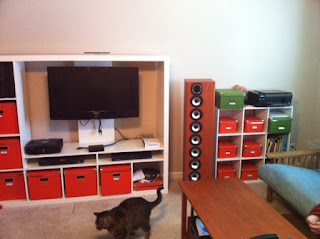 What a HUGE improvement!!! That's the Expedit TV Storage Unit from Ikea. Pictures of the rest of the room will come later this summer when I replace the futon (which you can kind of see the corner of in the bottom picture). This weekend, I added some homemade art to the walls. First, I made "tape art" following the instructions from Davis: Day by Day. Here's my version: 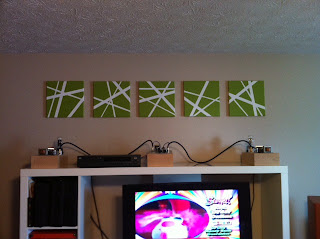 I used 12" x 12" canvases, white craft paint, and green latex wall paint (which you'll see again in a moment). I love how they turned out. Perfect for above the TV.

Wall art #2 was created generally following these directions from Thankfully Thrifty. But, I used a 16" x 20" canvas and skipped the tissue paper part. I painted the canvas to evoke the idea of sunshine. This is a very special song to my family--my 10-year-old son still wants me to sing it to him every night at bedtime. So, it seems right to hang it in the room where he spends most of his time. Perfect for the space above the printer. 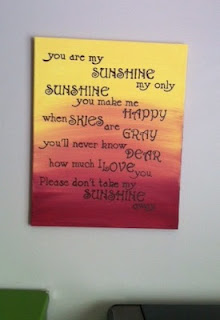 Now, on to the living room. Here's the before. I can't believe I ever thought this looked okay. Yes, that's Christmas wrapping paper in the corner. DVDs and video games on the floor. (Seriously, you never realize how bad something looks until you take a picture of it. You get so used to stuff being there that you just stop seeing it.) 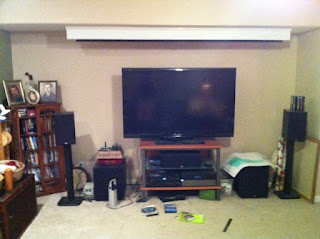 Enter the Hemnes series from Ikea: 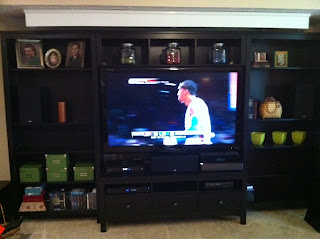 It's not completely accessorized yet. Once it was up, I realized I don't have a lot of tchotchkes. So, I'm slowly working on that. But, I LOVE this TV unit. Despite it's size and how dark it is, it makes the room look bigger! It nearly fills the 12' wall.

Once everything was up, I felt inspired to paint. The fireplace wall was painted a soft, grey-green. Very nice, very neutral, very boring. So, Saturday afternoon, that all changed.

You know that moment when you start painting, and you think, "Oh my God! What have I done?!?! This is a huge mistake!!!" Well, I felt that way too: 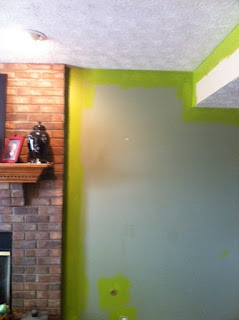 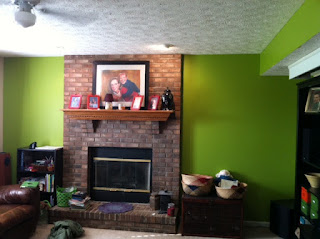 I couldn't be happier! This shade has been dubbed "Amanda's Signature Green" by my family. Now I need to rethink the mantle, and I think some kind of vinyl lettering on the soffit above the TV unit might be nice.  I'm already working on a couple of canvases for either side of the fireplace, but we'll talk about that in another post.

Sunday, I tackled the daunting task of overhauling the kitchen pantry. We've lived in this house for 6 years, and every moment of those 6 years--all 189,341,556 seconds--I have HATED the wire shelving in my pantry. Stuff falls over and sometimes through the wires. Plus, it was so deep that it was nearly impossible to see everything and know exactly what was there. After all of the work I did yesterday, the change is amazing. But, I'm not quite finished yet! So, that will be tomorrow's post.