Laugh till it hurts

Full disclosure: We don't do a lot. I mean, we do tons of stuff. But, Tim and I don't go out a lot. Our lives tend to revolve around kids and work. So, Thursday, when he texted me with, "Can you get out of work about an hour early tomorrow?" I immediately replied yes (because at that moment I was looking at my calendar) and wondered what the heck was going on.

Turns out, Chris Hardwick was performing at the Comedy Attic in Bloomington, and Tim wanted to go. Awesome! Like I said before, we don't do stuff, so this seemed like a spur of the moment adventure. He ordered tickets to the 8:00 show, and I booked a hotel room package that included tickets to the 10:30 show.....or so I thought. Turns out, they weren't supposed to sell that package on weekends of "Special Engagements," which this show definitely was. Needless to say, we were really disappointed, but glad we had tickets to the 8:00 show, so we were nice about it. The manager of the hotel called the owner of the club to try to work things out, and we went about our business.

When we arrived at the club for the show, the owner came out to talk with us, apologized profusely and really wanted to make things right. But, all the shows were sold out, so there was only so much he could do. He was also extremely glad that we were nice about things. And we were rewarded by our tab being completely covered. Sweet!  We were also told we were welcome to come back to the 10:30 show, but we would probably have to stand.

After the 8:00 show, Chris came out and signed autographs and posed for pictures. 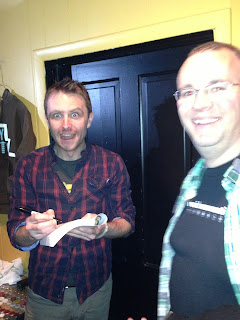 For this picture, I was a total dork and forgot to turn off the flash on my phone, but the pic is hilarious. 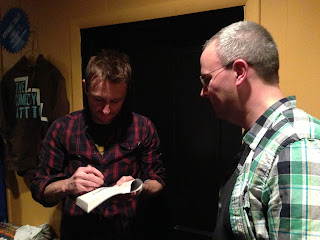 After that, we walked around the square and ended up at The Trojan Horse for dinner. 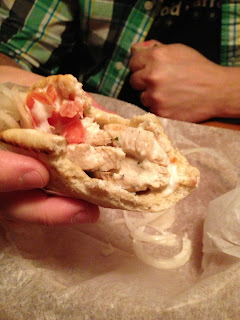 At 10:30, we wandered back to the Comedy Attic to see if maybe we could stand for the second show. turns out, they were able to seat us! I think the second show was funnier than the first. I don't know if it's because I already knew most of the punchlines or because I had been drinking all evening. Either way, so funny!! All in all, an excellent evening.

The next morning, as we were checking out of our hotel, they also felt really bad about all the confusion the night before and gave us $50 off our bill. Double sweet!

I think the moral of this story is: Just freaking be nice. Seriously. We had a wonderful evening made better by people who wanted us to have a wonderful evening. It was awesome! And we'll definitely go back. If you ever find yourself in Bloomington on a Thursday, Friday or Saturday evening, go to the Comedy Attic.

Also, two doors down from the Comedy Attic is a yarn shop.Yes, I went there this morning. And yes, I bought some Robin J. Edmundson yarn I can't get in Lafayette. Life is good.