I'm seeing the light at the end of the tunnel with my River in Summer vest/shawl/wrap/thing. It's about 75% done, and at this point, it's too big to carry around with me. So, I'm limited to working on it at home. I really hope to have it done by the end of the week.

Yesterday, my order from Spoonflower arrived! I couldn't be happier!  I have plans to spend the weekend sewing a couple of bags, another 3DS XL case, and maybe a few other little goodies. Just look at this fabric! I'm so excited to start working with it! I know what I'll be doing this weekend. 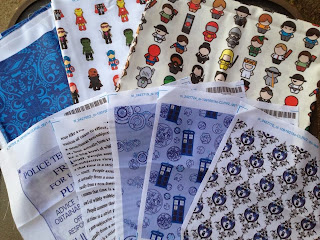 I'm also really excited about this yarn I purchased last week. It wants to be a Meridien. 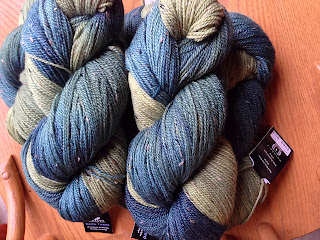 The color is all wrong in the picture. It's really shades of green, not blue and tan. The color is called "Spruce Moss." I want so badly to cast on RIGHT NOW, but I'm trying to be good and finish my River in Summer first. There's one other problem with starting Meridien soon. As I mentioned in a previous post, I'm teaching a top-down sweater class starting October 8, and I'm also very excited about the sweater I'll be knitting along with the class. But, even if I start Meridien right now, it's unlikely it will be done by October 8. It is, after all, knit with fingering weight yarn. It's going to take a long time to knit.

In the past, this wouldn't have stopped me at all. I'd get a case of startitis, and I'd just go with it. Start all kinds of stuff. But now, I know myself well enough to know that very few of the projects I cast on when I get startitis actually get finished. Most of them end up getting ripped out and the yarn put back in storage until something else strikes me.

Is that a problem? No, I guess not. But, there's something really satisfying and rewarding in finishing something you start. It's always a little disappointing to rip something out or to look at a long list (or big pile) of unfinished projects knowing most of them won't ever be finished.

So, I'm trying to learn to be selective in my starting. Using KnitCompanion to set up patterns on my iPad BEFORE I actually cast on has helped a lot. It forces me to read the pattern, look at construction, and think. There have been a number of times I've started setting up a pattern in KC only to realize half-way through that there's no way I'll ever finish the project. It's really wonderful and has saved me a lot of knitting time and energy.

But my situation right now is a little different. I've purchased and set up Meridien in KnitCompanion. I know I'll finish this project. It's a gorgeous sweater, and I want it. I also have an image in my head of what my top-down sweater will look like, and I know I'll finish it too. There's the added bonus that both sweaters are going to be knit in beautiful yarns that practically knit themselves. So what's the problem?

Well, it's sort of like multitasking. Can you do it? Yes. But, no one thing receives all your attention, so everything suffers as a result. Right?

I'm not quite sure what's wrong with me. I've never been this hesitant to start multiple projects. What does it mean?
Posted by Amanda at 8:49 AM