If you've ever read this blog before, you know I'm not a food blogger. But, every once in a while, I take a picture of food I've prepared and post it here. This is one of those times.

Lately, I've had a hankering for stuffed peppers. I distinctly remember not liking them when I was a kid, and in all my adult life, I've never made them. But I enjoy bell peppers--raw with dip, chopped up in a salad, thrown into a stir fry, sauteed with onions and mushrooms to put on top of meat. So why shouldn't I revisit that despised dish of my childhood and turn it into something I might actually like?

I looked at some recipes online, but ultimately, I decided to wing it. I stopped at the farmer's market on my way home from work and picked up peppers, tomatoes and some other stuff I thought might be good. Then, I stopped at the grocery store for meat and cheese. When I got home, I started chopping and cooking.

There seem to be two schools of thought when it comes to stuffed peppers: One has you stuffing the peppers with raw ingredients and cooking everything in the oven. The other has you cooking the filling, then stuffing the peppers and baking to make all the flavors meld. I decided to go with the latter.

Before I give you my recipe, I want to point out that this makes TONS of filling. I filled 12 pepper halves (6 peppers) and still had 3 pounds of filling, which I distributed evenly between 3 freezer bags and popped in the freezer. So, now I have the "hard" part done for three more dinners.

The peppers were a huge hit. We only have 4 pepper halves left, which means I know what I'll be having for lunch the next couple of days. 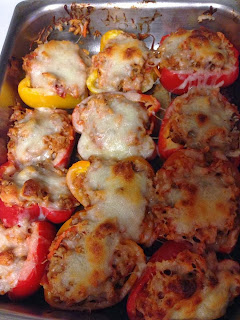 Filling:
1 lb sweet Italian sausage
1 lb ground pork
1 medium onion, chopped
handful of shredded carrots (I use the bagged matchstick carrots from the store)
3 or 4 cloves of garlic, minced
2 large tomatoes, diced (you could use a can of diced tomatoes)
2 tsp Italian seasoning
Salt and pepper to taste

1 1/3 c long grain rice
2 2/3 c water (I wanted to use chicken broth, but didn't have any in the house)
1 jar Newman's Own Sockerooni pasta sauce

Other:
6 bell peppers, cleaned and cut in half
2 c Italian blend shredded cheese (mozzarella is fine too)

Like I said, this makes a ton of filling. When I was filling the peppers, I kept having to swat my husband and kids away from the skillet because they were snitching little spoonfuls of filling. So I can't imagine how much I would have had left if they hadn't touched it. We've been thinking about other things we can stuff. Zucchini?  Mushrooms? Chicken? Large pasta shells or manicotti (though, with the rice, that's a heck of a lot of carbs!)? What other foods are stuffable?
Posted by Amanda at 1:28 PM

Email ThisBlogThis!Share to TwitterShare to FacebookShare to Pinterest
Labels: food