What a winter this has been!! Between the Polar Vortices that keep swooping down on us with more snow and cold air than we've seen in ages and the school cancellations and delays that result, this has felt like the never-ending winter. And it's only January! Rest assured, I'm warm and cozy and crafting like crazy. I've written several blog posts that just haven't been posted because as I wrote them, I thought, "When I get home, I'll take pictures, then publish the post to the blog." Then the photography just didn't happen. (Queue sad trombone.)

But today, this post IS going to happen. I have so much to tell you about. So many updates to share. And just ONE picture I'm waiting to take.

So, let's go back to December. My last post was on December 5. After that, I focused a lot on Christmas Knitting. I'm not usually one to do a lot of knitting for Christmas, but this year was an exception. Tori put in a very specific sweater request, and I wanted to make her a couple of pairs of socks. The sweater was completed not quite in time for Christmas, but by the Saturday after. The yarn is Noro Kureyon that has been aging in my stash for years. The pattern is of my own (really her own) design. I knit it to match her request. Here she is, mere moments after I completed the sweater. It's a terrible picture, but it's still evidence.  What you can't see: It's a top-down raglan, and it's tunic-length, longer in the back than the front. She loves it. 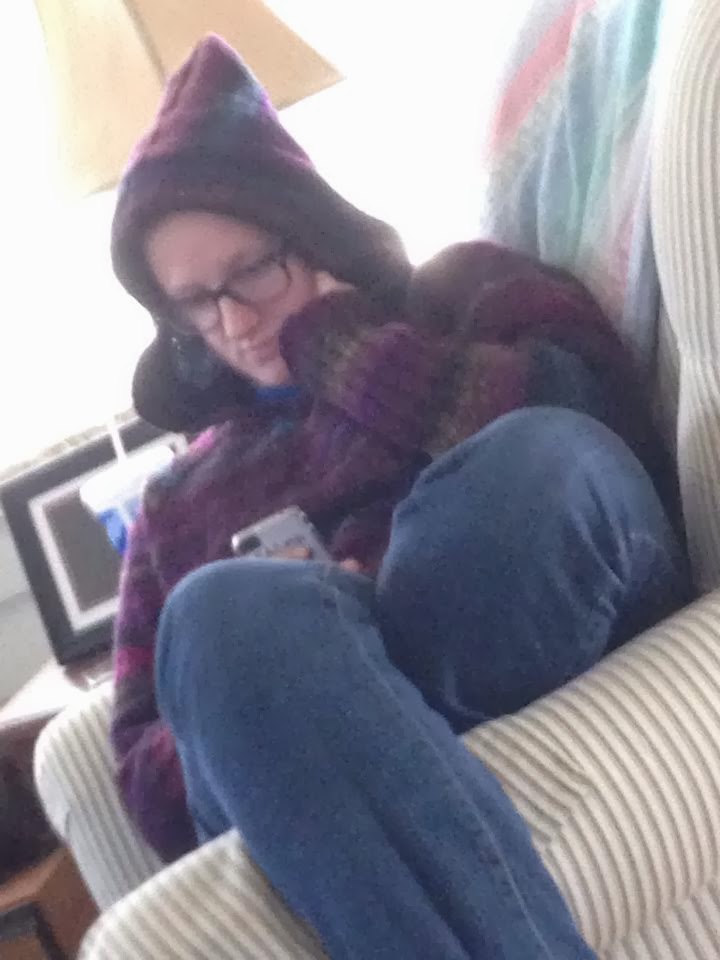 I only managed to finish ONE pair of socks. The other pair is nearly done, but not a huge priority for me. They are entrelac, and it's kind of difficult to make myself work on them. Unfortunately, I don't have a picture of the ones I actually completed. The two pairs of socks complement each other in an interesting way, so I'll be sure to take a pic of them together once both pairs are done.

I also worked on my Dreambird Shawl a lot, though it is still not complete. Here's a picture I took some time ago. It's about 3 times this size now. 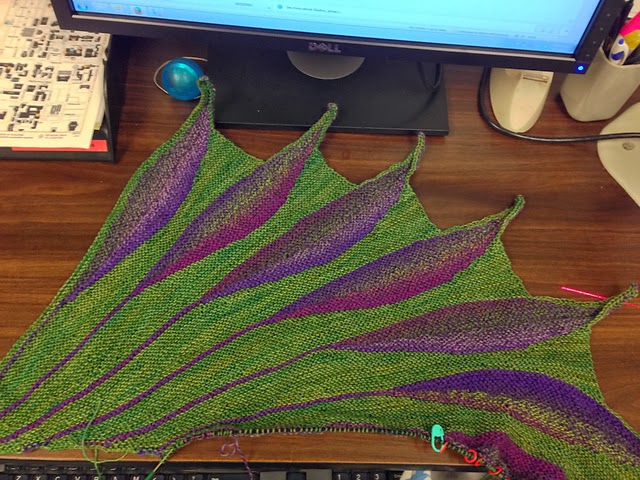 The green yarn is Malabrigo Sock colorway Fresco y Seco. The purple is Crystal Palace Sausalito colorway 8459 (quite a romantic color name...). I really love these yarns together, and this is quite a fun pattern to knit. But, it does require a lot of attention and many stitch markers. Maybe I'll get it out again, now that I'm done with my Rios sweater (but more on that in a bit).

Once we got through the holidays, I decided to get out my sewing machine. I can't remember if I have talked about my sewing machines before (yes, plural), and I'm frankly too lazy to go back and check. So, here's a recap: I have two sewing machines. One is a Kenmore circa 1973 or 1974 that belonged to my grandmother. It's built like a tank and served me well for a long time. However, its tensioner broke several years ago, and I've been unable to find a replacement or a way to fix it. Even so, I have used it occasionally with poor results. My other machine is a Singer that was also a hand-me-down from my sister-in-law. And it was a hand-me-down to her too.

So, I decided to get out the old Singer on January 4 to make a bag. Things were going okay until I attempted to sew about 6 layers of fabric together--2 lining, 2 quilting cotton, and 2 denim. It was tough. The machine didn't want to do it. But I forced it.....My husband thinks maybe it jumped a gear or something. Impossible to sew on the machine now. The needle bangs into the plate under the bobbin. After much frustration, including taking it apart and attempting to fix it, I got out the Kenmore. What a joke. With the tensioner broken, the seams are a mess. Still, I was determined and finished my bag. From a distance, it looks great. But, up close... well, just don't look too close. 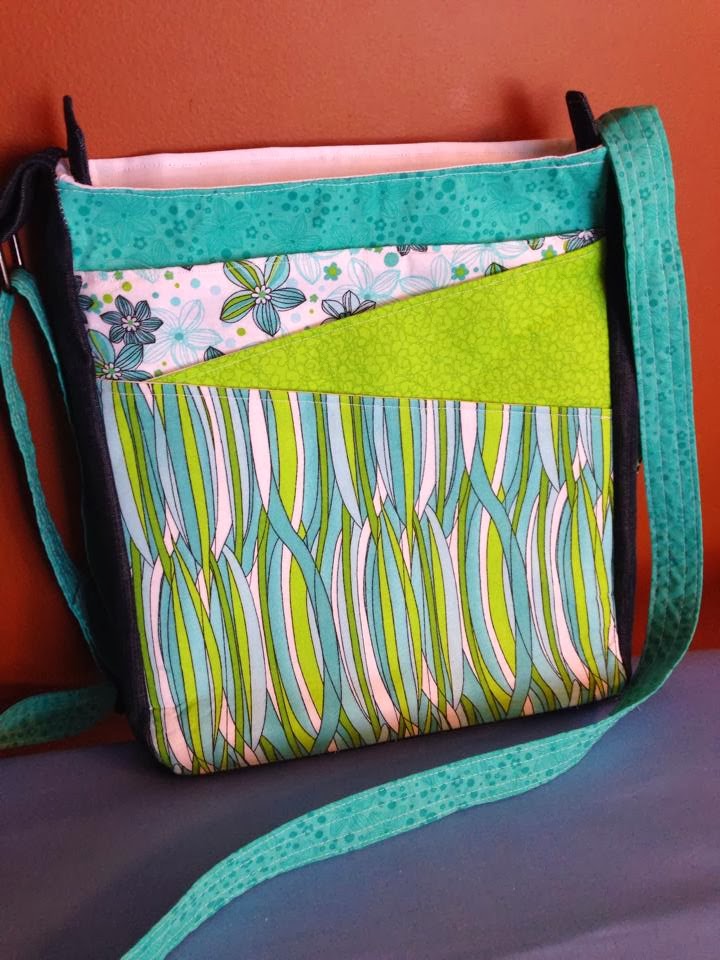 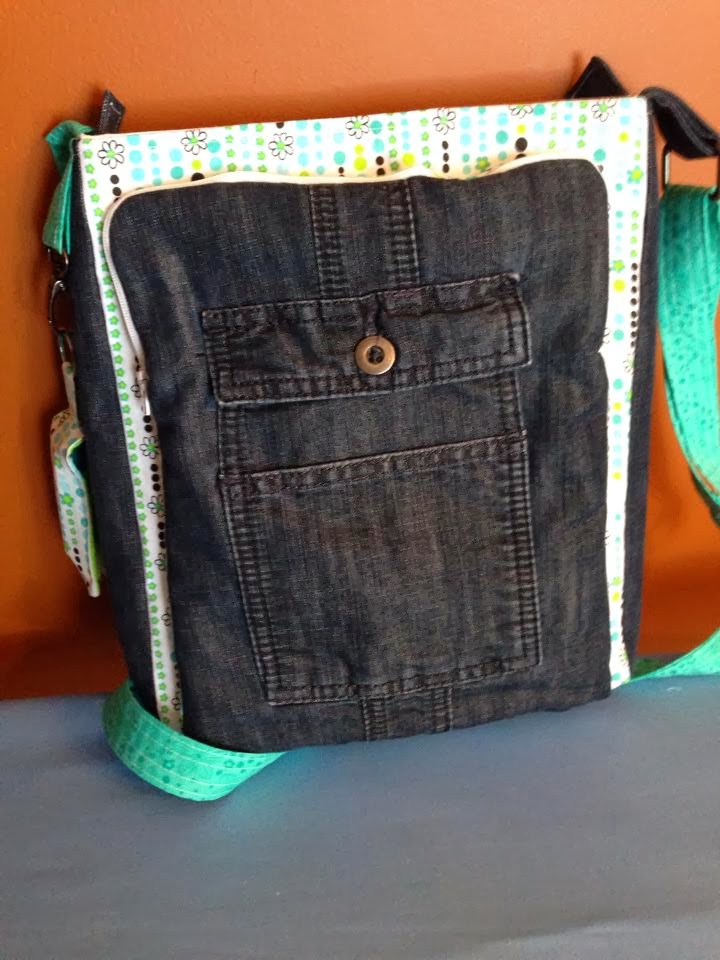 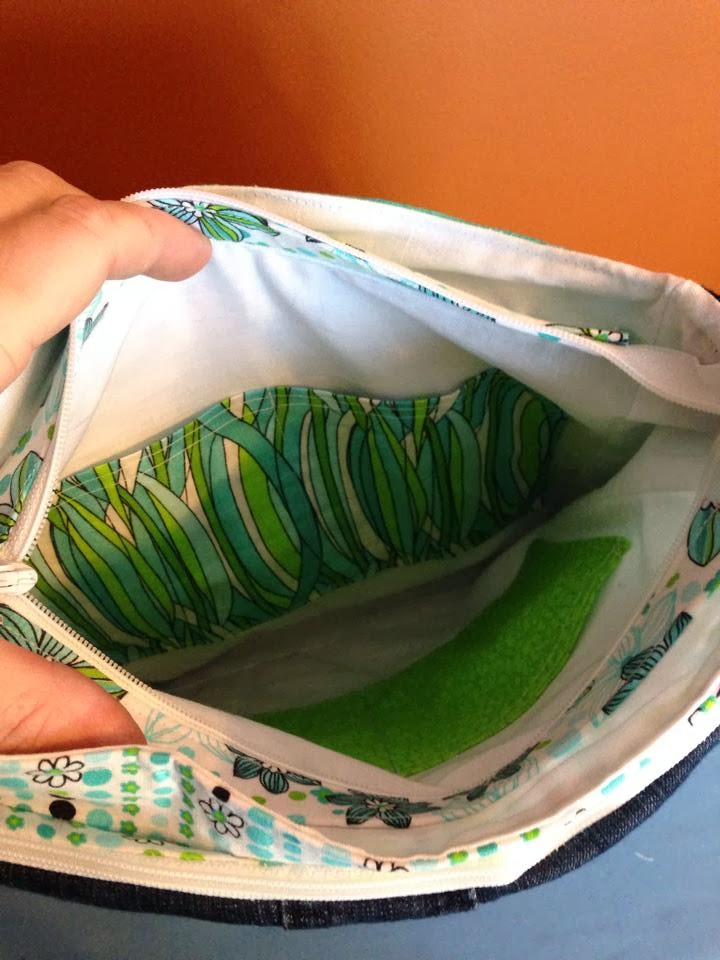 The printed fabric is fat quarters, I think from Joann's but I'm not 100% sure on that one. The denim is from an old pair of cargo capri pants. I love having the cargo pocket on the iPad pocket. And I love these fabrics. This will be a great bag for summer, if it lasts that long. Given the crappiness of the seams, I'm not sure it will.

Upon completing that bag, I came to a decision: It was time to get a new sewing machine. I'd only ever had hand-me-downs, and both of them were broken. Of course, when it came to shopping for a machine, I didn't even know where to start. I'm very thankful for friends who are avid sewists who were able to help me figure it all out. On January 8, I ordered my new baby. 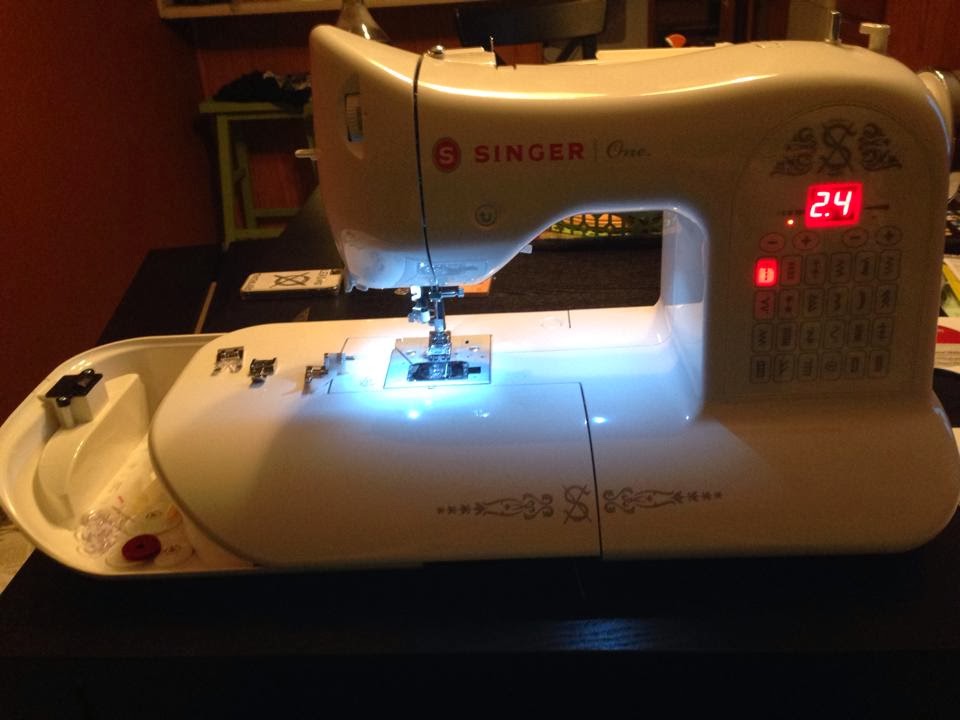 She's a Singer One, and is very fancy compared with what I had before. I haven't experimented much, but I have been a busy girl on the weekends. The first weekend, I made these: 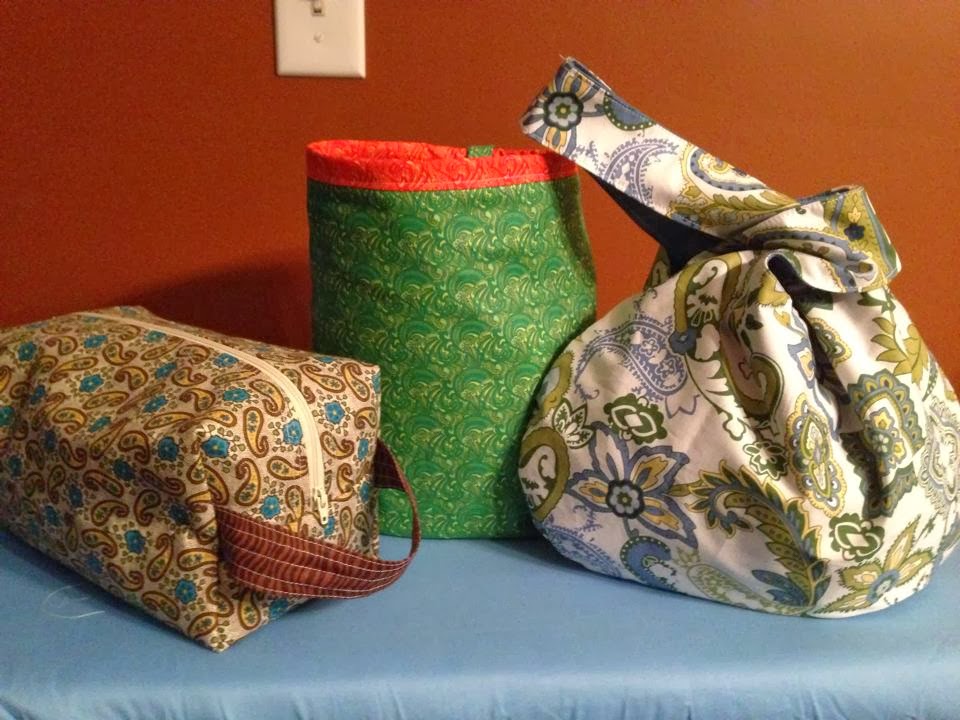 Left to right: Boxy Pouch from Pink Stitches, a car trash bag, and a Grab Bag (also sometimes known as a Japanese Knot Bag). All were very fun to make and went together like a dream with my new machine!

Last weekend, I made these little puppies. I saw something similar online, but couldn't find a pattern, so I made one up. They are graduated sizes, and the smallest is just the right size to hold my sewing machine cord and pedal. The other three will make wonderful project bags. 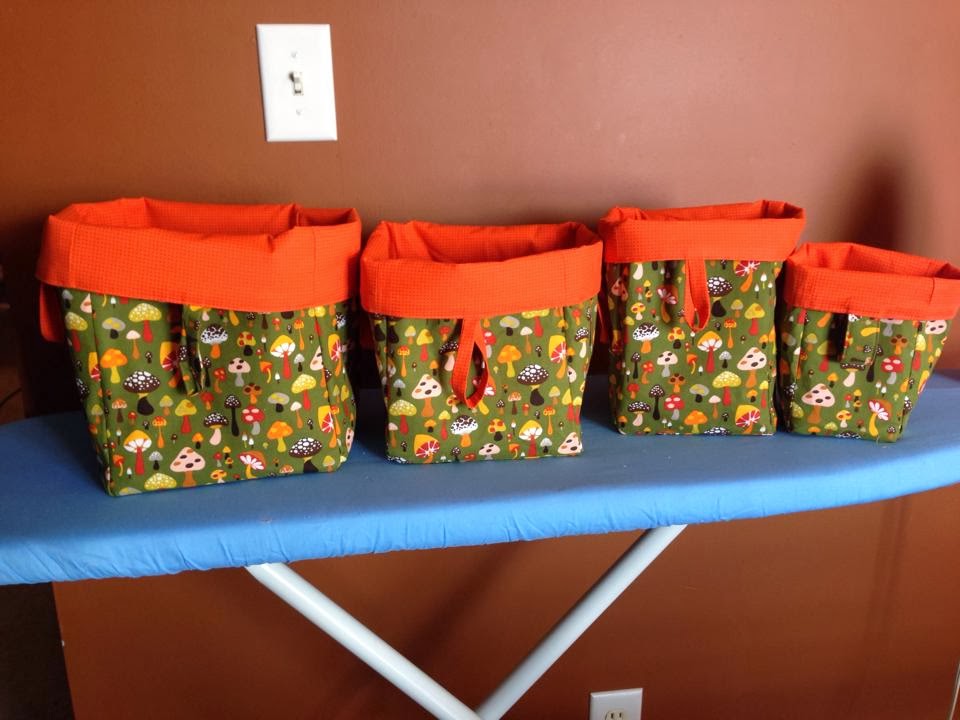 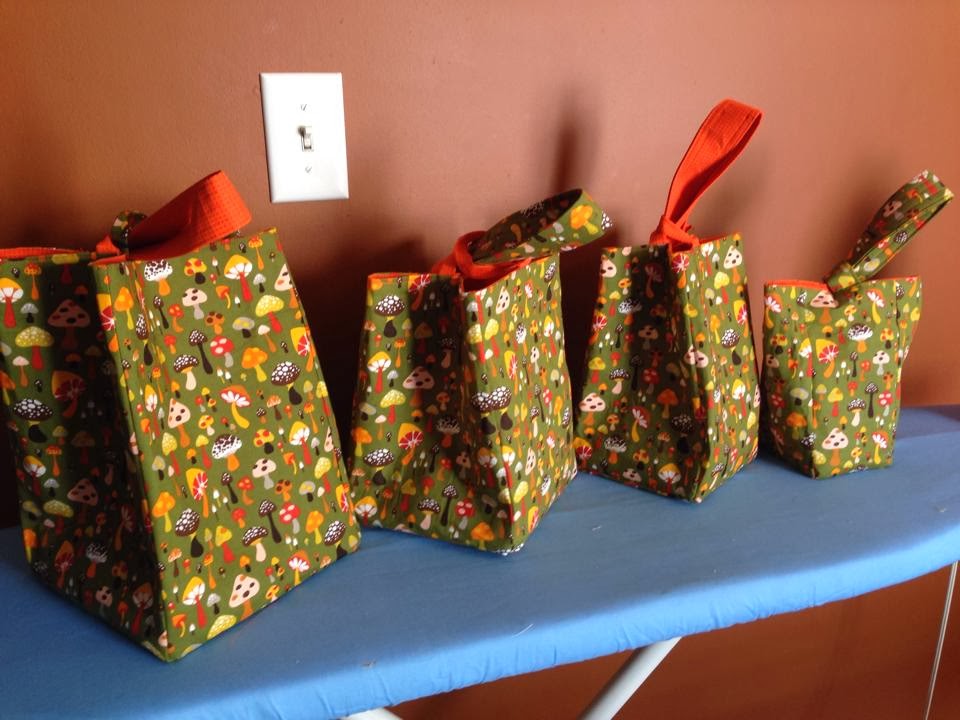 Yes, you've seen this fabric before. It's the same that I used for my new Circular Needles Holder. The biggest bag is 8"x8"x12" tall. The smallest is 5"x5"x9" tall. They are really fun, and I have plans to put together a little tutorial here when I have time.

Yesterday, school was cancelled because of cold. So, I was home with my kids. We were lazy all day. We rented a couple of movies from RedBox (Cloudy with a Chance of Meatballs 2 and Despicable Me 2, if you must know), and then just lazed about the house. I spent most of my day knitting and managed to finish the Malabrigo Rios sweater I started in October.  I love it so much. It's warm and soft and gorgeous (if I do say so myself; and I do), and fits nicely and....well, it's just perfect. So perfect that I didn't block it before putting it on and wearing it to work today. This is one thing I do not have pictures of. I want to wait until after it is blocked. And, besides, it's worthy of its own exclusive post anyway, so we'll save it for later.

I want to take a brief moment to thank everyone who was praying for the Purdue University family last week when there was an active shooter on campus. Fortunately, the shooter had only one target; tragically, he was successful in his mission. I don't know if we'll ever know the motivation behind his actions. However, I do know that life on this campus has been changed forever. We've all seen news stories about shootings on college campuses, and even at K-12 schools, but we all believe it will never happen to us. I never would have thought something like this would happen at Purdue. Could it happen? Sure. But would it? No way. I was wrong. My office is in the building right next door to the building where the incident happened. I was walking by that building mere minutes before the shooting occurred. Needless to say, I went home that night and hugged my kids and husband tight and told them I loved them. I'm so thankful to live in a world of fast communication and well-trained emergency workers.
Posted by Amanda at 2:58 PM