Ravellenics Sweater: Days 2 and 3 and a Tip about Hand Painted Yarn

This weekend was kind of a whirlwind. Friday night's opening ceremonies were.....interesting. Not my favorite opening ceremonies ever. The projection effects were really cool. The Swan Lake thing was kind of weird. They looked more like big jellyfish. The symbolism used throughout (like the red cogs and gears for Communism) was interesting. I keep using the word "interesting." But, my favorite part is always the Parade of Nations. I love watching all of the athletes enter the stadium, so proud to represent their countries. Seeing all the different outfits is always fun too. I loved Germany's brightly colored coats and pants. Lithuania was awesome in green--they looked like big limes. Slovenia looked fresh and bright in white, lime and turquoise. Canada and Russia both looked classically amazing. Great Britain, Japan, and Australia were kind of boring. Of course, you always have the tropical island nations dressed in shorts (Bermuda, we're looking at you). But the USA just looked stupid. I'm sorry. I know their outfits were made in the USA with USA-sourced materials and designed by Ralph Lauren, who is USA through and through. But they looked stupid. Ugliest outfits ever for the USA in the history of the Olympics. 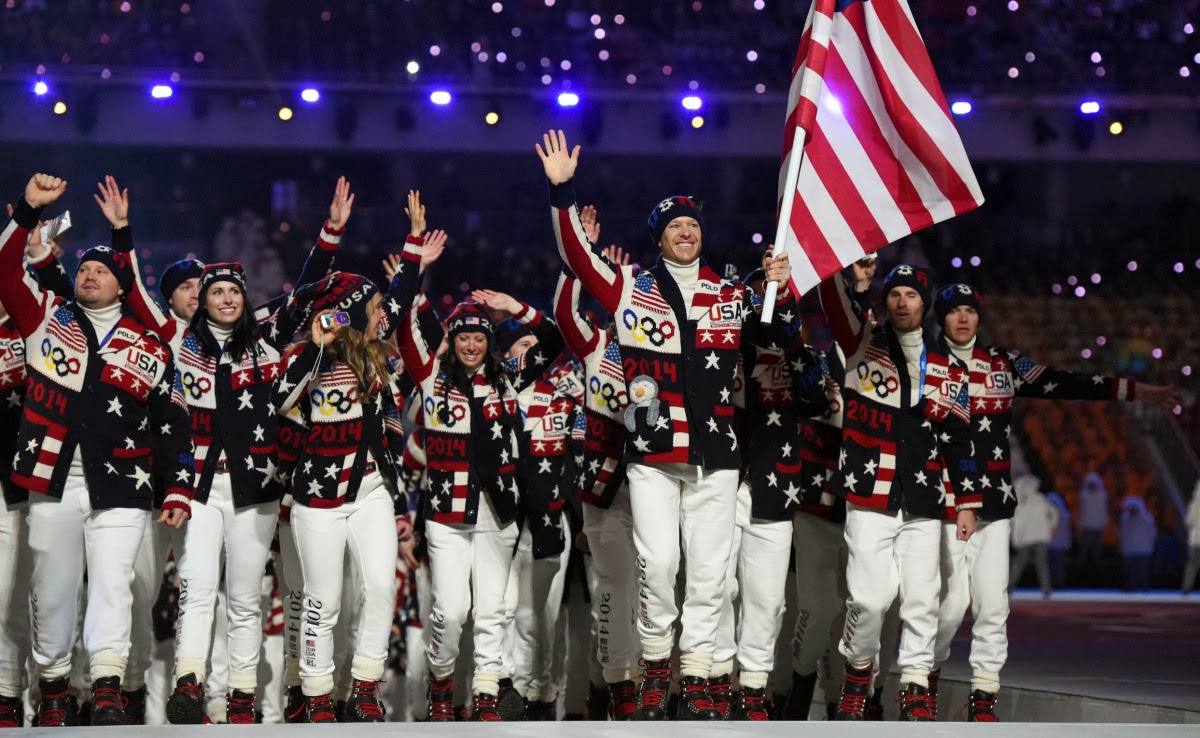 (source)
So, enough about those sweaters. Let's talk about MY sweater. During the opening ceremonies, I was able to knit part of the back and enough of each front to pick up the sleeve stitches first thing Saturday morning. 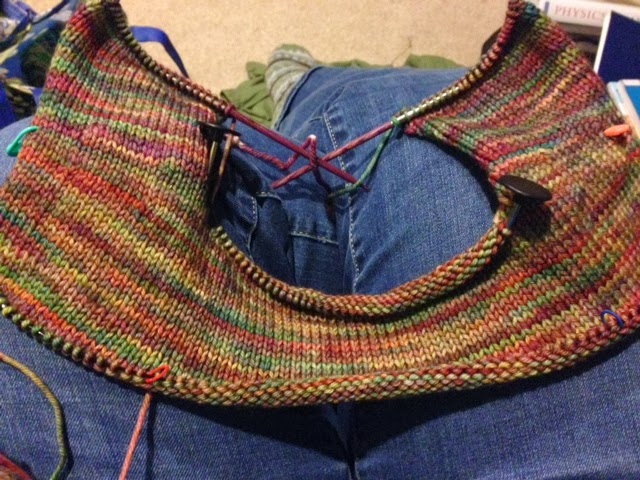 You might notice that these needles are different than those with which I cast on Friday afternoon. This is another way knitters need to be flexible. I cast on with US7s, which is what I used for my swatch, and after a few rows, it just felt too loose. Rather than fight my instincts, I followed them. I pulled out those few rows and cast on again with US6s, and it just feels perfect. I measured my gauge, and it was definitely the right decision. So, that's where I was at the end of the day Friday.

We spent Saturday morning at ISSMA (Indiana State School Music Association) Solo & Ensemble. Tori was performing with a flute ensemble and a solo. Her two performance times were about an hour and a half apart. Needless to say, I brought my sweater. But, before we get to that, allow me to brag on Tori for a moment. While she had the experience of performing with an ensemble last year, she had never gone to S&E with a solo before. For her first solo, she performed at Division I level, which is the most difficult. She got gold!!!  Which means she will go to State Solo & Ensemble in March. I'm so proud of her!!!! 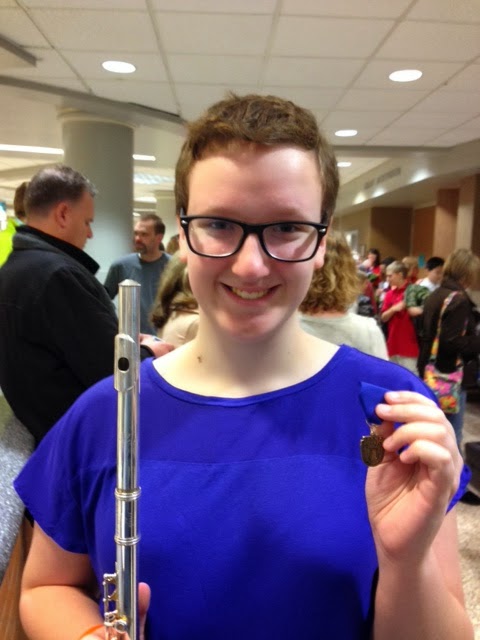 In the interest of giving equal time to my kids, I would also like to share that last Saturday, Aaron competed at S&E and earned gold for his Division V piano solo. He's been taking piano lessons for less than a year, so that's why the Division V. BUT, we're equally proud of him even though Division V golds don't get to go to state. 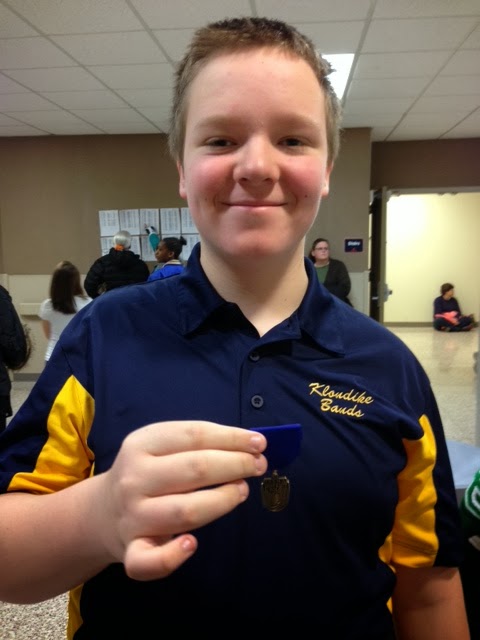 Okay! Enough bragging on my kids. Let's get back to that sweater! I took it with me to S&E so I could work on it during down time between performances. I was able to pick up the sleeve stitches and get a few more rows in. This is what it looked like when we got home just before noon: 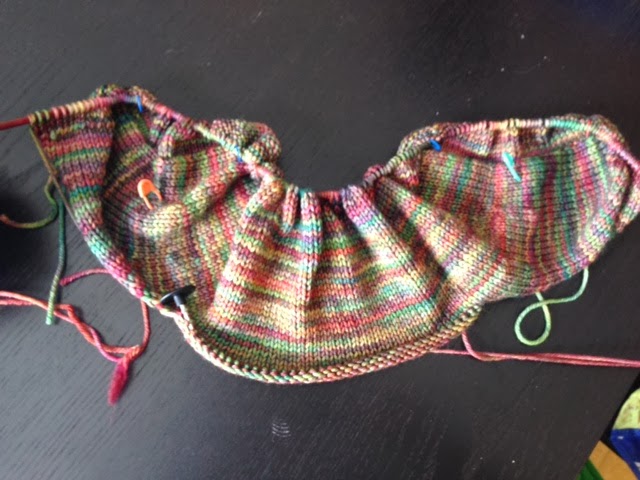 Saturday afternoon was a little crazy. We had a few errands to run and Tori had a birthday party to attend in the evening. So, I wasn't able to just sit and knit all day. I still managed to get quite a bit done. I was far enough on the sleeve caps that I could fold the front over the back. 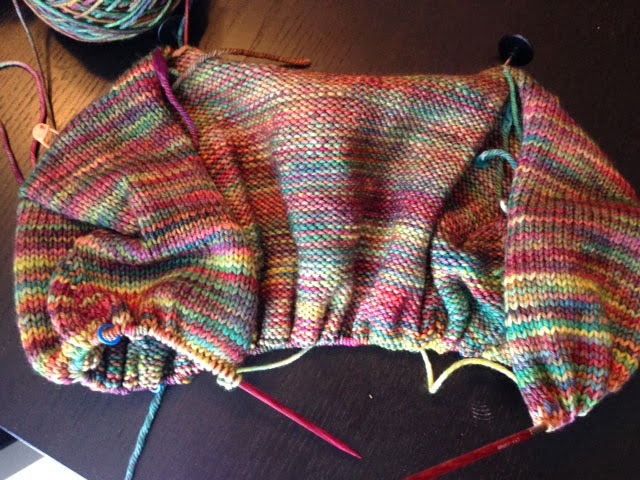 Sunday was also a little crazy. I always do laundry and get groceries for the week on Sunday. This Sunday, I also made a lasagna and a giant batch of chicken and noodles. Over the past few months, I've found it's just easier to cook all of the food for the week on Sunday afternoons, then eat "leftovers" every night for dinner. It's worked well so far.  But, yesterday, it kind of cut into my knitting time. I was still able to reach my goal of getting to the underarms by the end of the weekend, though! 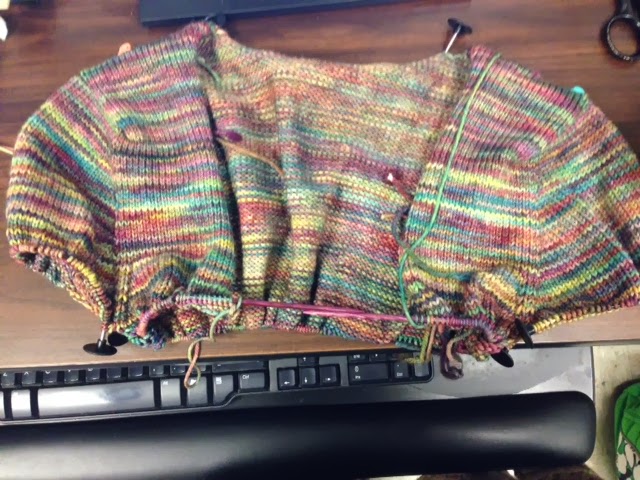 I also want to take a moment to talk about hand painted yarn. I *love* hand painted yarn. But (there's always a but), it's not the easiest yarn in the world to work with. If you're doing a small project that only needs one skein (like a hat), you're fine. But, as soon as you introduce a second or third skein (or even more!), you have to deal with variations. As is the nature of anything made by hand, these yarns are not perfect. They do not have dye lots and they are never identical. Here are the skeins I'm using for my sweater. The yarn (as I've said before) is Malabrigo Rios in the Arco Iris colorway. 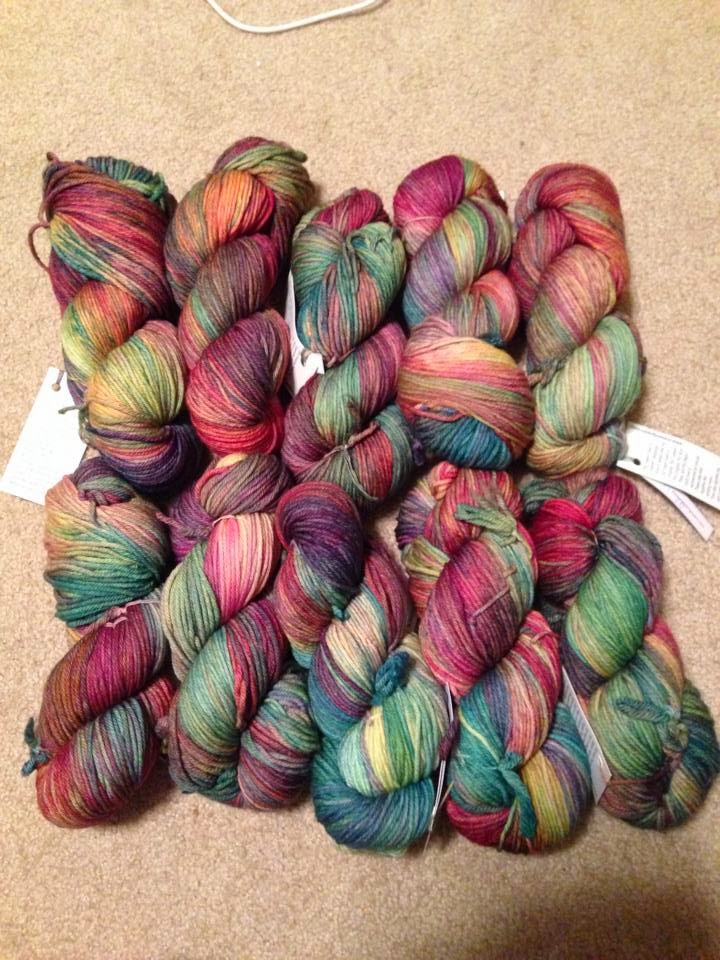 Right away, it's pretty obvious that these skeins are each unique. The one on the top right is decidedly lighter than the one in the center bottom. The one on the bottom right has more green in it than most of the others. There's no denying each skein is different even though they all contain basically the same colors. And, sometimes, once they are wound, the difference become even more obvious. 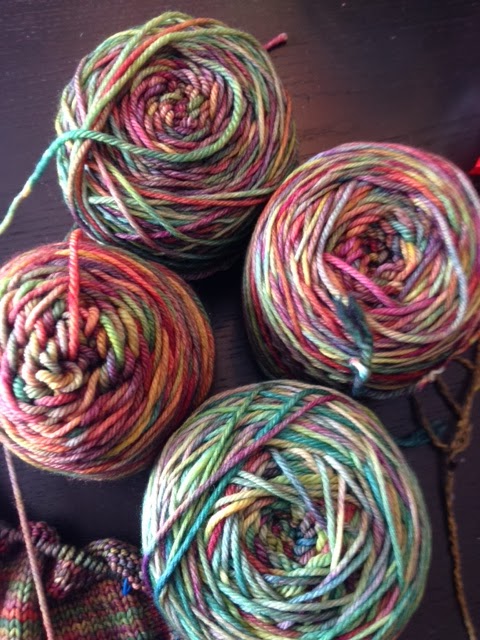 Look at that bottom skein! It doesn't even look like the same colorway anymore, and there are definite differences between the other three. But, I assure you, they are all Arco Iris.

So, what's a knitter to do? We don't want our projects to look like this when we change skeins: 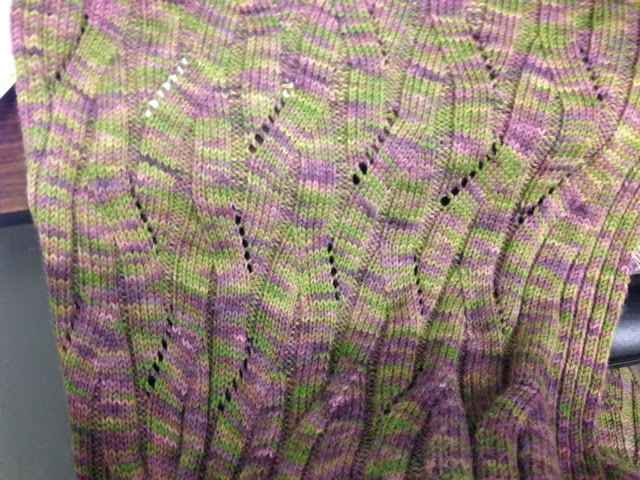 That's my River in Summer shawl/wrap/vest thing, which I am wearing today.  Because of the lighting in my office, the difference looks much more drastic than it really is (I hope!). See where it goes from dark purple to more green? That's where I switched to a new skein. (The yarn is Briar Rose Wistful, which I love so much there aren't even words.) This drastic line could have been avoided if I'd just taken a few extra precautions.

I know you've heard it before. When knitting with hand painted yarns, alternate between skeins to even out any color differences.

What does that really mean? It does NOT mean choosing two skeins and alternating every two rows between them until you have used them up and then switching to two more skeins. It means alternating between all of your skeins more or less equally. If you are using something that is feltable, you can spit splice every time you join a new skein to avoid an abundance of ends. However, if you are using a machine-washable yarn, this probably means you will have a lot of ends to weave in. It's a small price to pay for a finished garment that looks amazing. Here's how I'm doing it: I use two skeins to work 6 or 8 rows, alternating between them every two rows. Then I switch out at least one of the skeins, but sometimes both. I also make sure the skeins I'm alternating between are significantly different. Like I'd use a more green skein with a more red skein. This also helps avoid any pooling of colors that can sometimes happen with hand painted yarns.

The only real drawback I can think of with this method (other than the potential of many more ends to weave in) is making sure you reserve enough yarn for sleeves and front bands/collars. With a garment using industrially dyed yarn that is all the same dye lot, it's easy to set aside three skeins for the sleeves and not touch them until you are ready to do the sleeves. But, with this method, you want a little bit of each skein in all parts of the sweater. I'm planning to work around that by knitting the sleeves once the body is about 2-3" beyond the underarm. Remember, I'm knitting this sweater top-down, so I'll pick up the sleeve stitches and knit both sleeves before completing the body. Then, I'll just have to make sure I have enough yarn for the bands of ribbing around the fronts and neckline. We'll save that math for another day, though.
Posted by Amanda at 3:11 PM