Ravellenics Sweater: Days 8, 9, and 10 and More Math and Injuries

Now that I'm working on the body, I probably need to start thinking about how much yarn I will need for the wide ribbing that will go around the fronts and neck of the sweater. I know it will be 1x1 ribbing and will be 7 1/2" deep (at least). How do I make sure I save enough yarn for that?

Well, if I was knitting the sweater on the same size needles with which I swatched, it would be pretty easy. Remember the swatch? Here's what it looked like: 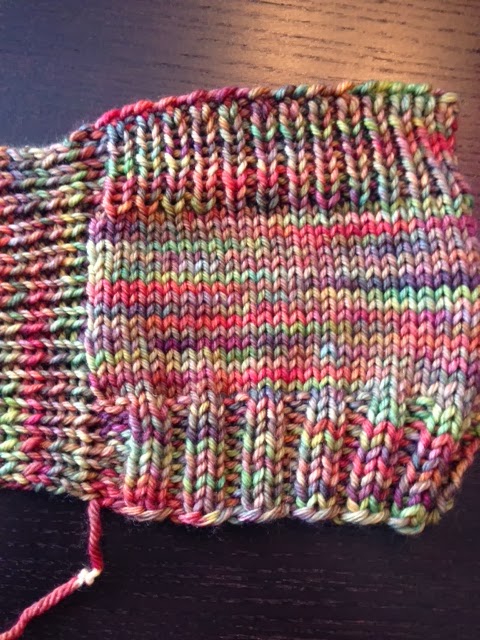 See that bit of 1x1 rib on the left? I could count the number of rows and note how many stitches wide it is, then measure it. Note all those numbers. Then unravel it and see how much yardage was used for that bit.

However, I did not knit the sweater on the same size needles as the swatch. So, I'll have to knit another. This one won't be as involved as the first one! I'll cast on 30 sts and knit 1x1 rib ..... honestly: until I get sick of it. Ideally, I would knit that swatch to 7 1/2" long. This would give me a very good (but probably not exact) idea of how many rows it takes to knit 7 1/2" of 1x1 rib. The weight of the sweater as I'm knitting will affect this a bit. Let's face it: 7 1/2" is a lot, and I will honestly not knit that much for a swatch.

Once the new swatch is complete, I'll do the same counting, measuring and unraveling I would have done with the existing swatch.

Here's where it gets a little tricky. The longer I knit my sweater, the more yarn I'll need for the wide ribbed band. So, it's not like I can say, "Okay, this band will take 200g of yarn. I'll knit until I have that much left over." What if knitting until I have that much left over results in needing 210g of yarn for the band? If I want to use as much of my yarn as possible with a minimum left over at the end, I'm going to have to work some magic. I'll have to go into it with a rough estimate, then measure and work the numbers regularly as I approach desired length.

If I'm willing to fudge a bit and overestimate and end up with some yarn leftover (which I am), that makes it a little easier. I know I want my sweater to be 30" long. So, I just have to figure out how much yarn I'll need to go 30" up each side and 7 1/2" around the back neck. Easy, right?

OK! So, enough about math. Let's look at how my weekend knitting shaped up. Friday night, even though it was Valentine's Day, my son had two basketball games (he's in a rec league for middle schoolers). That was a lot of knitting time. By the end of the day Friday, my sweater looked like this: 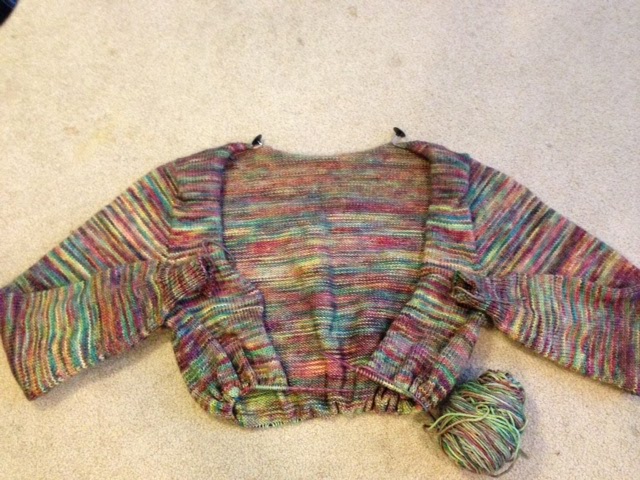 I had made pretty decent progress on the body. At this point, I knew I was increasing at the side seams every 6 rounds because I'm somewhat pear-shaped, and I need more fabric go go around my hips than around my bust. When following a "regular" sweater pattern, I often use one size for the top part of the sweater and a size or two up for the bottom part. So, the rows are getting longer by 4 stitches every 6 rounds. Translation: the knitting is going more slowly.

Saturday morning, I had to clean my house. It was driving me freaking nuts and I just couldn't take it anymore. We also went out for an early dinner Saturday late-afternoon to celebrate the kids' golds at Solo & Ensemble, Tim's 40th birthday (which was Wednesday), and Valentine's Day, so that ate into my knitting time a bit. Even so, by the end of the day Saturday, it looked like this: 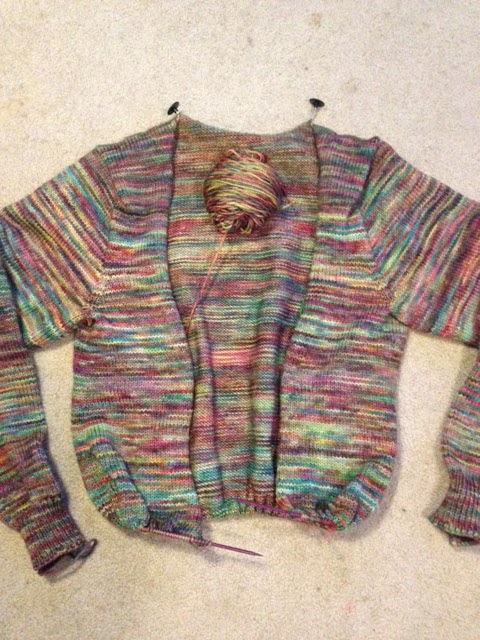 Sunday was quiet. Thank heaven! I had my usually early-morning grocery trip, and Sunday is always laundry day. At one point, my husband and kids said, "Let's all go see the Lego Movie." My reply: You go ahead. I'll just stay here and finish the laundry. And knit. And watch the Olympics. They were gone several hours (because they also ran some errands), which was glorious. It was nice and quiet and just about perfect. By the end of the day, my sweater looked like this: 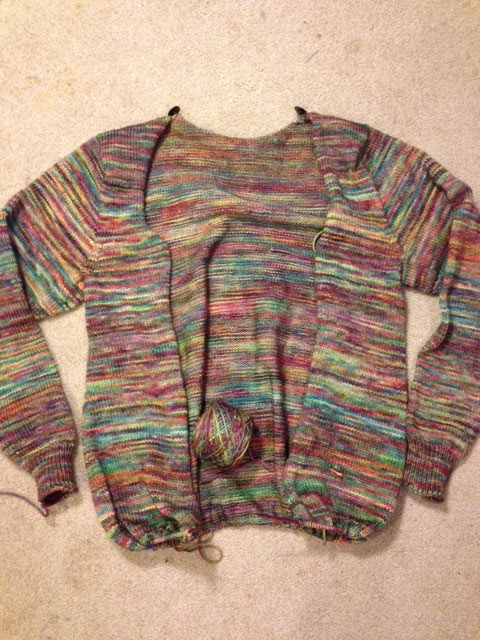 I'm getting there! I honestly believe I'll be able to pick up the stitches for the front/neck ribbing before the end of the day today! I'm really ahead of schedule!

One price we sometimes pay for overzealous anything is injury. Olympians experience it all the time. When I was watching Snowboardcross yesterday afternoon, I saw two women suffer injuries that took them out of the rest of the Games. One blew out her knee. The other...well, I'm not sure specifically what got injured, but watching her crash, I was surprised she didn't break her neck. It was really scary.

While knitting injuries are rare, they usually involve some kind of repetitive stress--carpal tunnel, tennis elbow, etc. Mine is, thankfully, not as severe as either of those. I managed to knit so much that I actually punctured the skin on my index finger where I push to slide the stitches up the left needle. Apparently, I always push in the exact same spot. It's a hard habit to break. Every time the needle tip hits there accidentally, I about go through the roof. I'm making a concerted effort to pinch the tip of the left needle when I have to push the stitches up, but it's just not as fast. 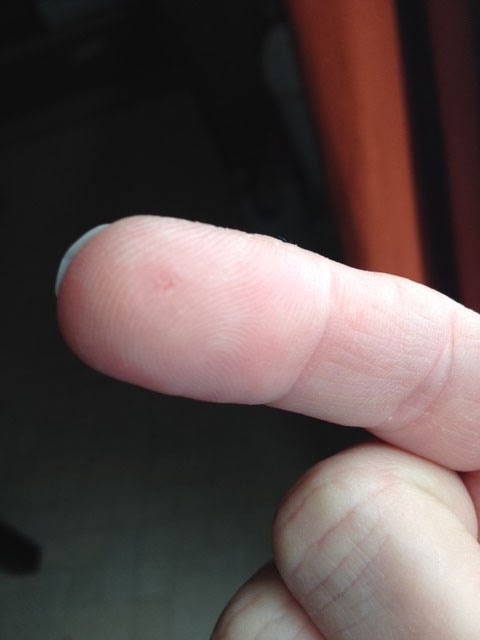 It's not a career-ender, or even a game-ender, so that's good! I'm working around it, and I'm determined to finish! LOL!